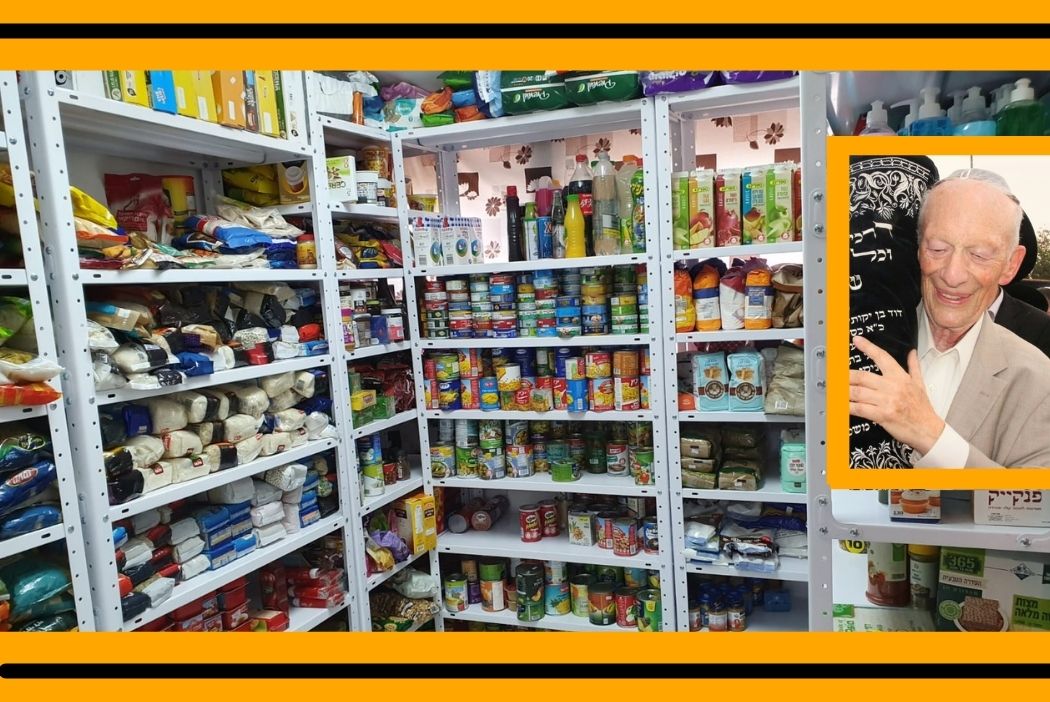 Nourishment of the body plays a key role in rehabilitation.

For people with little or nothing to eat, Lema'an Achai hosts an Emergency Food Pantry complete with nutritious staples, tuna, beans, rice, canned vegetables, etc.
The Bert Kahn z''l Food Pantry ensures that families who are trying to improve their lot, yet still suffer from poverty and crisis, will have appropriate nourishment for themselves and their children.
לעילוי נשמת ברוך יהודה בן דוד הכהן        Bert Kahn 1938-2019
Lover of Am Yisrael, Eretz Yisrael, Torat Yisrael, Chesed and Good Food!
Born and raised in Milwaukee WI, Bert was married in Minneapolis in 1963 to Erika Apt. They lived in Skokie, Il where they raised their family.
He was the Father of 3 children- Rita (deceased), Mitchell (Elana), Abby (Rimon) and devoted grandfather.
Bert was the Grandfather of the Century!
His granddaughter Dani in nursery school, who lives in New York, intentionally chose the letter zayin for "show and tell". She invited her Zadie in Skokie to come for the big day. Without a blink, Bert flew to New York -and Dani proudly presented her human "show and tell" - her Zadie. Bert arrived with bags of goodies for the kids, sat in the center of the circle and read them a Zadie story. His charm and warmth, immediately made him The Zadie of Dani's class.
Bert z”l was a loveable, sensitive, kind and wise human being.
He was a lawyer by profession.
He was a very active member in the Mizrachi Movement for much of his life. He served as Co-President of the National Mizrachi movement where he was honored at a gala event in New York.  He also was President of the Chicago Branch. He also was a senior advisor and fundraiser of the RZC in an ongoing capacity
Bert was an active member in his Shul, Or Torah, where he coincidentally met Ron Alswang Public relations Director of Lema'an Achai. Ron, who was visiting, asked Bert if he was mistakenly sitting in his seat. Bert in his modest manner replied that the seats in the Shul belonged to everyone. He then proceeded with a Dvar Torah on the subject-- quoting a New York Rabbi that by chance Ron knew very well and was shortly to be on his way to visit. Ron was impressed with Bert and also with this significant story then- and today.
Bert rarely missed a minyan in Shul.
He also took charge of the culinary needs of the congregants as he was Seudah Shlishit chairman for over 20 years!!
But his greatest pride was being the Shul's Candyman. Bert frequently said in jest that if he ever ran for office, he would surely be elected, as he had several generations of kids, now grown, who would vote for him. He loved celebrating Chagim and Yahadut with his whole heart and soul.  He traveled far and wide to hear good chazanut, especially for the selichot.
Numbers were his forte and he had a customized gematria prepared for every brit, bar mitzva, wedding or important life event. He was known to make the biggest effort possible to attend all smachot.
Learning Torah, reading and studying were integral parts of his being...  He went through several cycles of daf yomi
Quite recently he signed up to the Great Books program and studied literature of the Western world, Orient and Middle East at the University of Chicago. He was an ardent traveller and covered much of the world.
So much can be said about Bert, but for those who knew him his outstanding qualities were generosity, honesty, kindness and giving. He was a lover of People. He did so many deeds of chesed in a very private manner.
He never wanted to hear a bad word spoken and truly sought out the good in every person and in all situations. He cared so much for others and that they should be happy.
How joyful and grateful and in peace he would be today knowing that others are doing chesed in his name and helping supply food to the needy of Israel by contributing to the Bert Kahn Pantry Fund of Lema'an Achai.

Donate To This Project

By partnering with Lema'an Achai, you empower hundreds of families annually who would otherwise continue–quite possibly indefinitely–to be dependent on others for support. We provide a hand up, not a hand out. Smart Chesed indeed!